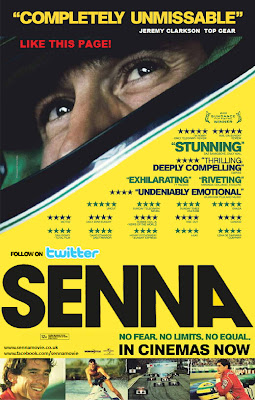 At the end of April, I posted this piece featuring a trailer for Senna. Tonight I went to see it. A full review will follow but for now I have just three words:

If you've not seen it yet - get yourself to a cinema. Even if it is not being screened daily, the chances are you'll get a chance to see it on Tuesday 21st June, Senna Day. Listings can be found on the film's Facebook Page.
Posted by oneexwidow at 22:30

Grrr! You do of course realise the one issue with that Facebook page.

One one click through that does not work or go anywhere is the one that is for...

Oh hell! Wish I hadn't seen this blog until later. I was determined to avoid seeing this film as I find the 'sport' SOOOOOO boring. Even Mark Kermode's (who has a similar feeling towards motor racing) lyrical, arm-waving enthusiasm failed to convince me. But now you go and write this - and on the very day last day when it's being shown in Brighton at a reasonable hour - and, dammit, you've now got me wavering. (Bugger it!)

Well, I didn't go. But only because I thought it would be unwise to spend around £8 (train + admission) when I'm especially money-tight this month. But I had already washed mt hair (that which I've got left, I mean) in preparation to going - but will now almost certainly catch it up on one of those 'screenings for oldies' they regularly have in nearby Brighton. (Cheaper too!) But your respected recommendation has certainly tickled my curiosity, dammit!

All dolled up and no-where to go, eh?

Hope if and when you see it, you do enjoy! Feel responsible now!!

Andrew, just seen that (because of public demand?) it IS being shown at a reasonable hour throughout next week in B'ton. So, Mon will be the day - and it had BETTER be good enough for my discerning tastes! ;-)