A Journey through Texas - Mothers Heaven

It's time for the second entry in my meander through Texas' back catalogue in the run up to the release of the new album on May 20th.

Today, though, saw the release of The Conversation - and we can finally hear a studio recording of a song which has been played by the band at the odd few concerts they have actually played over the past couple of years. The single version has a more poppy sound than this version, although it does still have the country twinges. To be honest, I'm not sure what to make of it at this point, but have purchased it for multiple listens and further digestion. I suspect it will work better in the context of the album. It's not getting a physical release, but it is available on iTunes et.c if you want your own copy... 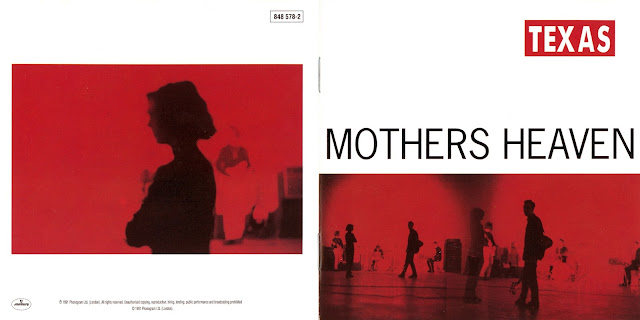 Texas' second album, after Southside, was 1991's Mothers Heaven. Much less successful here, their continued popularity in France and the Low Countries ensured the band survived to record a third album before the triumphant return to the higher reaches of the UK charts with White on Blonde in 1997... but that's getting ahead of myself.

Mothers Heaven kicks off with the title track which in some ways echoes I Don't Want A Lover at the start of Southside. The long instrumental intro (in this case an accordion playing a French-sounding tune) gives way to familiar guitars and Sharleen Spiteri's voice-as-instrument as she sings two lines beautifully, hauntingly, purely. The (then) trademark Texas' guitars and drums are launched - although there is a hint of the keyboard effects that would become Texas' staples on future albums.

It's a great opener - especially for a second album - reassuring the listener that the band hasn't gone off in a wacky direction*. The solidly familiar sound (although again with hints of what was to come) continues with Why Believe In You.


Dream Hotel is less rocky than the first two tracks - and takes the pace down, giving Spiteri a chance to demonstrate her range with her voice carrying a sultry tone. It's a low-key track whose impact is more felt by its immediate absence when it fades to silence in the end. It is followed by This Will All Be Mine in which Spiteri is accompanied by little more than a slide guitar and the faintest of backing tracks with only a couple of pieces of punctuation from the drums.

For all they may well be regarded as firmly "Middle of the Road", Texas have often tried to experiment within the confines of what they do. This hasn't always been successful - but it has enabled them to re-invent themselves and regain previous successes when they have been in danger of disappearing up cul-de-sacs.

At 6'46" Beliefs is longest track on the album. Somehow, though, it manages to be less than the sum of its parts. Heavy guitars, solid drums, a catchy chorus and Spiteri's vocal all combine to create a track that is enjoyable but transient. It's followed by Alone With You (the second track in the above video) which I suspect is the track I'll be singing for the rest of the week.

Next is In My Heart which starts with electronic introduction before the more familiar Texas sound re-appears for what is almost an anthemic song about choosing between reality and dreams. 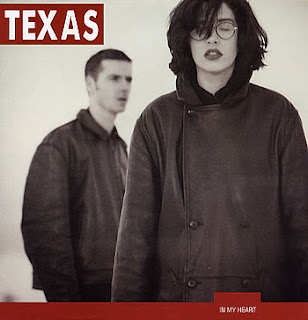 Waiting is this album's "Southside": an instrumental track to reduce the tempo and to lead into the understated but beautiful Wrapped in Clothes of Blue. Return has more than the usual country tinge to it, and limited instrumentation - it's a simple track which revels in its simplicity. Finally the plaintive Walk The Dust finishes the album in a pretty low key way.
The album is oft overlooked in Texas' canon - probably because of the lack of commercial success. The 2001 Greatest Hits album did not feature any tracks from it although "In My Heart" did appear on the 2005 package "The Collection".
I've always thought that Mothers Heaven was somewhat unjustly overlooked - but having re-listened to it, with a critical ear - and frame of mind - I fear I may have to concur with those who feel it lacks substance, coherence or a stand-out track.
Musically, Mothers Heaven is similar to Southside, although the album as a whole is more downbeat and subdued; the bass drum that characterised much of the first album is less evident and there is a softer sound in evidence.
That said, the album is of a piece with their debut - some of the future developments, even if foreshadowed, were still very far away - but we shall come to those in future weeks.
Andrew
* This will be covered when we get to "Careful What You Wish For"...
Posted by oneexwidow at 01:07

Texas bailed on the their original sound which is a shame. Country blues with slide and reverb, after Rick's Road, it was all downhill, but to each their own. Mother's Heaven stands out over their first album due to the production quality and the variation in songs. Oddly enough, IMO< the best songs are the last 3----the classic haunting "Wrapped in Clothes of Blue", the stripped down country "Return" and the anthem closer "Walk The Dust" with it's incredible keyboard, haunting lyrics and exceptional, if not cut short, guitar solo at the end. Yes, it's true, if you like the Texas sound of the past years, you won't like Mother's Heaven----I'm just sad they couldn't find more commercial success with their original sound which was...a hybrid original.