So, after a break, here we are at W... and I've chosen The Waterboys and "The Whole of the Moon":

Andrew
Posted by oneexwidow at 07:25 3 comments

Email ThisBlogThis!Share to TwitterShare to FacebookShare to Pinterest
Labels: Music, Not an A-Z of my CDs, The Waterboys, You Tube

Earlier this year I visited an exhibition in the gothic surroundings of New College, University of Edinburgh's Divinity Faculty. The exhibition, Shadows of the Divine, showcased the art collection of the Methodist Church augmented with pieces from various prominent Scottish Artists and an original 1611 edition of the King James Authorised Version of the Bible.
The exhibition wasn't quite what I expected - the collection surprised me in that the pieces were modern and contemporary unlike the religious art to be found in the National and Provincial galleries. Whilst I don't have a faith, my upbringing has given me an understanding and appreciation of the Bible and it's stories/message. The contemporary nature of the works cast these in a fresh light.
Unfortunately, for copyright reasons, I can't publish any images here but you can follow the links below to selected works:
The son of man is come - Ralph Beyer (1921-2008)
Noli me tangere (Touch me not) - Roy de Maistre (1894-1968)
Pieta - Elisabeth Frink (1930-1993)
Crucified tree form - the agony - Theyre Lee-Elliott (1903-1988)
Untitled - Pentecost - John Brokenshire (1958-)
You can browse more of the collection here and if the exhibition visits somewhere near you, it's well worth a gander - dates are here.
Andrew
Posted by oneexwidow at 07:00 1 comments

Last weekend saw the See No Evil street art project take over a street in central Bristol, transforming a series of grey, concrete façades into a riot of colour. 90% of the art is permanent and will only be removed as and when buildings are demolished and/or renovated.
I managed to take some pictures whilst the works were in progress, as well as some later in the week following the "unveiling" of the various pieces. Here are a few of those work-in-progress pics - there's something incongruous about seeing graffiti artists working on scaffolding and cherry-pickers! 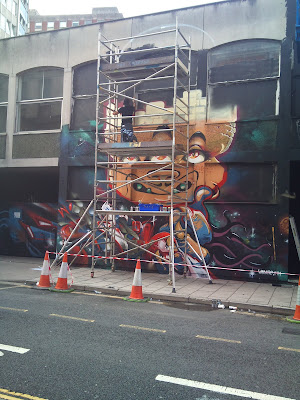 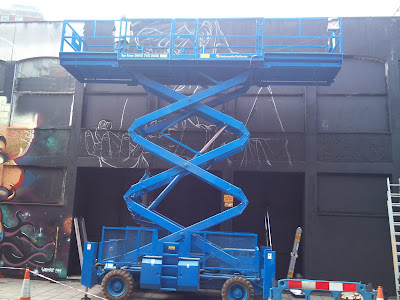 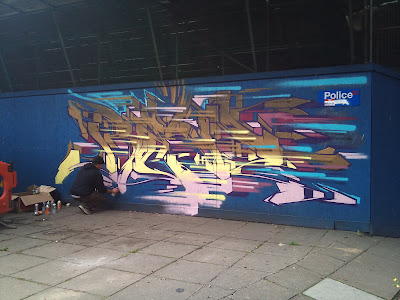 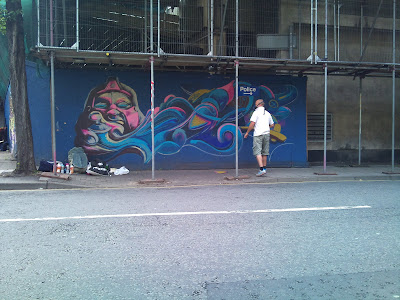 Andrew
Posted by oneexwidow at 12:08 2 comments

Posted by oneexwidow at 17:15 3 comments

It's Sunday. It's time for a Sound. And this week, I've gone for a religious number. Well, kind of...

I always loved the way the band had a person's name (taken from the Sinatra film "Meet Danny Wilson". I also had, back in the day, a copy (or possibly a taped copy) of the solo album of Gary Clark after they split up... I may well try and find something from that for future use here!
Posted by oneexwidow at 07:00 1 comments

This month's 5 on the 5th theme is "My Town", so here are some pictures which capture different aspects of Bristol. For more entries visit The State of the Nation UK, it's the only place to be...
You can catch a bonus Bristol post over on my Tumblr blog!
Andrew
Posted by oneexwidow at 20:36 6 comments

Email ThisBlogThis!Share to TwitterShare to FacebookShare to Pinterest
Labels: 5 on the 5th, Bristol, Photos

An album I wanted some years ago, and probably flirted with getting on more than one occasion, was The View's Hats of to the Buskers. Although that album, their first, was Mercury nominated, subsequent commercial success has evaded them.
Here they are with Same Jeans, which reached Number 3 in the charts. Apparently he's been wearing them for four days now, but that's just the way they roll in Dundee...

It's W next week... could you be in line for some Kim Wilde? What would you choose/not choose?
Andrew
Posted by oneexwidow at 07:00 1 comments

Email ThisBlogThis!Share to TwitterShare to FacebookShare to Pinterest
Labels: Music, Not an A-Z of my CDs, The View, You Tube

5 on the Fifth is coming around again. Here's a quick guide to taking part:
You can see previous editions here or my entries here. This month's theme is "My Town" ...do you think anyone would notice if I reposted this from a previous occasion?: 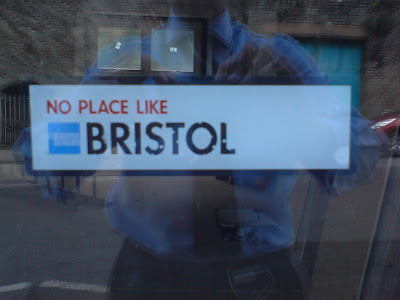 Andrew
Posted by oneexwidow at 19:02 0 comments