A toast to The Man Himself

Earlier today it was announced that Iain [M] Banks had died. Whilst it was known that his death was imminent, the news was no less the galling for that.

The Man Himself (TMH), as he was known on the fan forums, was erudite, witty, intelligent and humble. His books were imaginative: exploring the extremes of human nature, love and relationships with a mixture of comedy, pathos and violence. The landscapes of his non-Sci Fi books were often evocative and (for Scots at least) recognisable. His characters were mostly well rounded and complex, reflecting reality rather than being standard tropes. His plots could be epic in scope (The Crow Road) or conceived with clever twists (The Wasp Factory). He was never afraid to play with the form of the novel or return to his favourite themes; familial relationships, religion, socialism and secrets were all recurring features of his work.

I met him once, at a book reading in the Waterstone's at the West End of Princes' Street in Edinburgh. To be honest, I can't remember much about it beyond queuing up to get my books signed - I can't even remember what book he was promoting at the time (I came away with a signed copy of The Business and one of The Bridge for my dad; it may have been for the paperback release of The Business or, perhaps, the hardback publication of one of his 'M' novels...) - but I can remember being incredibly pleased to have "met" him, and to have obtained his signature. 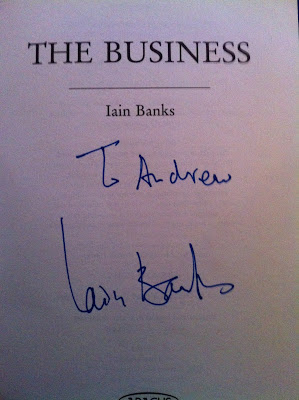 Last October, I was supposed to go to a reading for the launch of The Hydrogen Sonata. Sadly, I ended up double booked. Even more sadly, I will never have the opportunity again. I would like, therefore to propose a toast. 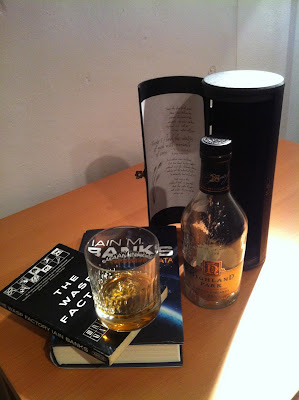 Andrew
Posted by oneexwidow at 22:50 1 comments

Email ThisBlogThis!Share to TwitterShare to FacebookShare to Pinterest
Labels: Iain Banks, In Memoriam

Once again I find myself apologising for a lack of recent bloggage... I intend rectifying this in the coming week - I have a reasonably sized list of blog ideas awaiting execution!

Meanwhile, it's Sunday afternoon, so here is a Sound for your earholes: The Rasmus with In The Shadows. Enjoy!


Andrew
Posted by oneexwidow at 15:06 0 comments