The Storm is finally over... 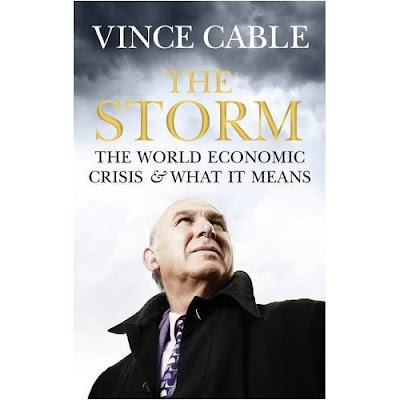 As I've mentioned before, my reading patterns of late have been severely disrupted. Last night, however, I finally managed to finish Vince Cable's The Storm.

Unfortunately, given the length of time and sporadic nature of my approach to the book, I severely doubt that I have gained as much out of it as I should have. I also think that to attempt a full review would do an injustice to the book itself.

I will, therefore, restrict myself to a few comments and urge you to read it for yourself.

Published in early 2009, this is an immediate history of and response to the credit crunch. Surprisingly readable (with, perhaps, the exception of the prologue, it focuses initially on the UK and Northern Rock before looking at the international aspects of the financial crisis, including the impact and importance of the developing economies of, principally, China and India. Further chapters develop arguments for potential solutions, with reference to historical events and economic theories on both the Monetarist and Keynesian sides of the debate.

Cable has written numerous economic texts and had firmly established himself as a politician with a rare insight into such matters. As Liberal Democrat Treasury Spokesman he had the mastery of his brief - and his political opponents. Now as Business Secretary, he has the task of putting into practice some of the theory he has espoused over the years, albeit in unenviable conditions.

Although the world has moved on in the 18 months or so since The Storm was published, it is still a worthwhile read which I thoroughly recommend. All the more so as it's going to be a while before Cable is in a position to write another one!

Next up is a much lighter affair - Ben Elton's Past Mortem. Following Blast from the Past, however, I do not hold out much hope for this but I shall give it a fair chance.
Posted by oneexwidow at 19:04

Given that he has some knowledge and is willing to air it, are we lucky to have him in the Government?

Like you, I enjoyed the book. It would have been nice though if it didn't simply lay out the mistakes people made but also did a bit more to help explain why so many apparently bright and knowledgeable people made mistakes that now seem obvious. (My own brief review is at http://www.libdemvoice.org/what-vince-cable-doesnt-tell-us-19833.html).

@Stephen: Absolutely... he'd have been even better as Chancellor but that's now a moot point.

@Mark: I remember seeing your review before and agreeing with it while, at that point, halfway through the book. Having finished the book now, I think it's a very fair assessment.

Well, I'll be blowed! I thought that I'd been interested in politics ever since schooldays but the books on the subject which I've ever read could be counted on my fingers - and certainly none in the last decade or even two. My admiration for your mental stamina has just risen a (further) few notches. Clearly I've been missing out myself.


Re Ben Elton, I've only read 'Gridlock' and 'Popcorn', both quite a few years ago, which I thought were fair enough but not enough to make me hungry to read more, though I suppose I will in time. (Does he still have his women characters wearing "skin-tight" outfits? Phwwworrrrrr!)

"Does he still have his women characters wearing "skin-tight" outfits? Phwwworrrrrr!"