I'm finally going to see Harry Potter and the Deathly Hallows part two tonight, so my Sunday Sound is most definitely going to be this:

Those I work beside may have to put up with my renditions of it for the next week or so too!
Andrew
Posted by oneexwidow at 17:21 4 comments

Email ThisBlogThis!Share to TwitterShare to FacebookShare to Pinterest
Labels: Harry Potter and the Deathly Hallows, Music, Sunday Sounds, You Tube

And so we reach the tricky end of the alphabet but somehow this entry for U was not at all difficult. Here for your delectation is the unrivaled synth pop of Ultravox with Vienna. This means nothing to me...

Email ThisBlogThis!Share to TwitterShare to FacebookShare to Pinterest
Labels: Music, Not an A-Z of my CDs, Ultravox, You Tube

Well, that's the weekend almost over... just over five days till we can do it all again!

Hard-FI - Living For The Weekend on MUZU.
Andrew
Posted by oneexwidow at 23:15 0 comments

Whilst he may not be one of my favourite painters, Lucian Freud - whose death was announced earlier this week - did paint one of my favourite pictures: Two Men.There is something tender and intimate about the picture. Whether that intimacy is love, lust, welcomed or threatened is more ambiguous.
I have to say, I take it at face value; the clothed figure reclining after coming home late to find his partner already asleep. The National Galleries of Scotland offer a differing explanation and these, too, could fit. What do you think? 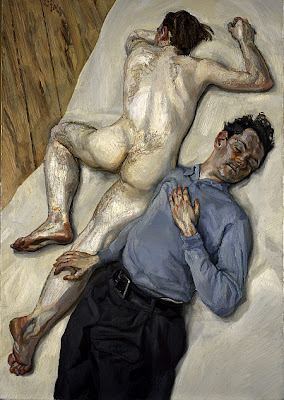 Andrew
Posted by oneexwidow at 11:12 2 comments

For this week's entry you almost got Bruce Springsteen until I realised I'd covered S last week. The Boss is going to have to wait until another day... Having gone back to the drawing board, I decided to feature a bit of Transvision Vamp. If you don't like it, well I Don't Care...

Email ThisBlogThis!Share to TwitterShare to FacebookShare to Pinterest
Labels: Music, Not an A-Z of my CDs, Transvision Vamp, You Tube

A conversation with Stephen (2)

Those of you who follow my friend Stephen's blog over at The State of the Nation UK will have already read this post, which is the second in our (very) occasional series of Facebook conversations released into the wild. This latest, instigated by Stephen, starts with The Perfect Man and ends with a Grumpy (Old) Man:
SC - The perfect man...
AB - I think the concept of the The Perfect Man, or indeed, The Perfect Person is deeply flawed. No one is ever going to be perfect.
SC - Indeed, but what about Perfectland where everything is perfect - what do the guys look like?
AB - Hmmm… I suppose they would look like they'd just walked off the set of Kylie's Aphrodite Les Folies show. Which probably betrays an element of body fascism in me.
SC - Its the only good fascism! Despite the fact the Abercrombie & Fitch shop floor helpers are employed because they have good genes, they are a welcome sight in their shops.
AB - Good Fascism?! Hmmm... I've never been to an A&F. Have tried going into Hollister twice but just find it too weird!
SC - Hollister is a strange place - you cant actually see the stock it's so dark. That makes me sound old! A&F is better, though there you have to sometimes shout to be heard over the music!
AB - I was thinking I sounded old complaining about Hollister - and that was without mentioning the music! Or the ridiculous facades. But this is in danger of turning into an edition of Grumpy Old Men...
SC - At what age do you become old and grumpy? I quite enjoy complaining about things!
AB - I think for me it was around 13... So what's your favourite thing to complain about!
SC - People! I despair of society sometimes - the selfishness of people saddens me.
AB - Yes but not everyone is like that - or like that all the time. For example, the British public, through various means, raised £102m for Comic Relief this year, at a time of apparent austerity. I think we should be positive and celebrate the good as well as attack the bad.
SC - You are correct of course, but when I see individual acts of selfishness, I get pretty angry!
AB - Perhaps we should get you some anger management courses!
You can read our first conversation here.
Andrew
Posted by oneexwidow at 17:00 1 comments

Email ThisBlogThis!Share to TwitterShare to FacebookShare to Pinterest
Labels: A Conversation With Stephen

The Dark Knight Rises (well, in a year he will...) 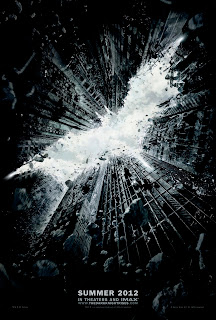 One of my favourite writer/directors is Christopher Nolan, best know for Momento, Inception and the re-boot of the Batman franchise. On the 20th July next year, The Dark Knight Rises will be released, completing Nolan's trilogy of Batman films.
In Batman Begins, Nolan developed Batman's backstory and imbued the character with a gritty darkness lacking from some of the previous films. The Dark Knight was memorable for Heath Ledger's amazing portrayal of The Joker in his last complete filmed role.
The Dark Knight Rises has a lot to live up to... but I'm confident it's in good hands. Along with the next Star Trek film, the latest Bond and the first of Peter Jackson's Hobbit films, it's another on my long list of films I'm looking forward to next year. Here's the first trailer, only 366 days to go...

This week's Sunday Sound is The Beautiful South's beautiful version of "You Just Can't Smile It Away". Enjoy:

Andrew
Posted by oneexwidow at 19:49 0 comments

Earlier this week I posted some pictures of Bristol's Wow! Gorillas with the promise of more to come... Well, here's a second installment of pictures:
Another picture of the last Gorilla can also been seen on my photo blog.
Andrew
Posted by oneexwidow at 07:00 2 comments

And now for something completely different...

... some classical music. Although I enjoy classical music and have a modest collection, I've never featured any on this blog - until now. Sit back and enjoy this recording of Sergei Rachmaninoff playing the first movement of his 2nd Piano Concerto:

Andrew
Posted by oneexwidow at 07:25 1 comments

Email ThisBlogThis!Share to TwitterShare to FacebookShare to Pinterest
Labels: Music, Rachmaninoff, You Tube

Tomorrow is the release date of Harry Potter and Deathly Hallows, Part II and the culmination of the Harry Potter films. I'm not sure when I'll go, having a preference for cinemas which aren't crowded and are not full of children! Still, I do want to see it sooner rather than later!
I've previously featured a couple of trailers on these pages but now Warner Brothers have put together this video which looks back on the films and gives a potted history of the story so far. It's amazing how young Daniel Radcliffe is in the first film - he really has, like his character - grown up on screen!

Enjoy, if you're so inclined! Endure, if not...
Andrew
Posted by oneexwidow at 07:11 1 comments

Suede are a band that I'm slightly ambivalent about but, like most people my age, their music was part of the backdrop of my formative years. On that basis, I've chosen them for this entry on by Not an A-Z... Here they are with "She's in Fashion":

Email ThisBlogThis!Share to TwitterShare to FacebookShare to Pinterest
Labels: Music, Not an A-Z of my CDs, Suede, You Tube

Following yesterday's post featuring multiple Gorillas in Bristol - here's another. The Drumming Gorilla was an instant hit in this classic ad for Cadbury's Dairy Milk. Actually, I can't quite believe this ad is 4 years old already - and while they've tried to recapture the magic of this, I don't think they've quite pulled it off since.

Andrew
Posted by oneexwidow at 07:00 3 comments

I've previously blogged about Edinburgh's cowparade and Bath has had it's pigs... now Bristol has got in on the act (and the art) with a city-wide invasion of Gorillas.
Celebrating the 175th anniversary of Bristol Zoo Gardens, Wow! Gorillas is raising awareness of - and funds for - Gorilla conservation as well as Wallace and Gromit's Grand Appeal. For the next two months, 60 fibre-glass Gorillas variously decorated by local artists will be on display around the city ahead of an auction at the end of September.
Over the past few days I've seen a number of them. Indeed on Saturday I went on a Gorilla Safari and managed to take a number of pictures - enough for a few posts of which this is just the first! There'll also be some over on my photo blog too.
Andrew
Posted by oneexwidow at 07:00 4 comments

On Red Nose Day, I posted this blog which featured footage of the tragedy which was the genesis of Comic Relief. This week, the news of the growing problems caused by the drought in the Horn of Africa has led to a Disasters Emergency Committee appeal. The footage may not be as dramatic as that from 1984, and the camps may seem to be better run and better prepared and supplied, but 10 million people are believed to be at risk of famine.
Please watch this video and, if you are able to, please consider donating. DEC appeal funds are channelled through major UK charities, many of whom are already working in the affected area. You can donate online here and if you're a UK taxpayer please complete the Gift Aid declaration so that tax relief can be claimed on your contribution - boosting your donation by 25%. You can also text "CRISUS" to 70000 to donate £5 through your UK mobile network.

If you're not able to donate but did contribute towards this years record breaking Comic Relief total (£102 million at last count), you may find this of interest, taken from an e-mail I received today: 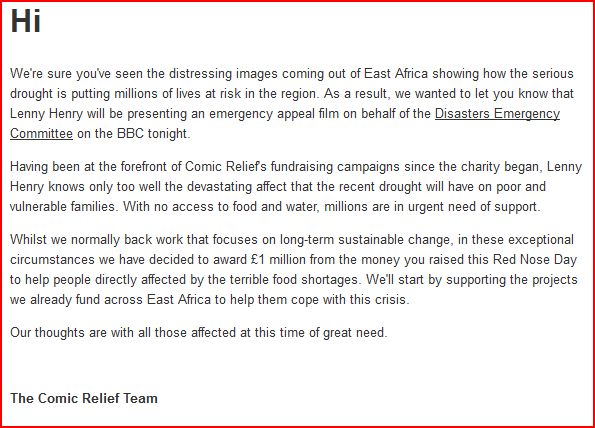 Andrew
Posted by oneexwidow at 00:26 0 comments

There May Be Trouble Ahead...

A couple of weeks ago something reminded me (or maybe I just remembered for no reason) about a great series of adverts from the nineties. This was reinforced by a feature on Tony Bennett on Radio 4's Today programme a few days ago.
Allied Dunbar was a Life and Pensions brand which has since been subsumed into Zurich. The theme of the adverts was about preparing for the unexpected in various situations. Here are three focusing on employment, health and family changes:


Andrew
Posted by oneexwidow at 07:00 0 comments

And so we reach R, and a choooon from a band who did have other hits but will forever be associated with today's song - Reef. Actually, this is one of those songs which I wasn't necessarily a huge fan of at the time but really like now.
Here it is - Place Your Hands:

Reef - Place Your Hands on MUZU.TV
Enjoy!
Andrew
Posted by oneexwidow at 07:00 0 comments

Email ThisBlogThis!Share to TwitterShare to FacebookShare to Pinterest
Labels: Music, Muzu, Not an A-Z of my CDs, Reef

It's the 5th of the month and that can only mean it's time for 5 on the 5th! This time the theme is Silver, in celebration of it being the 25th edition of the veritable photo-fest. Make sure you check out the various other entries linked from Stephen's blog!
Here are my Silver pictures:
Andrew
Posted by oneexwidow at 20:31 7 comments