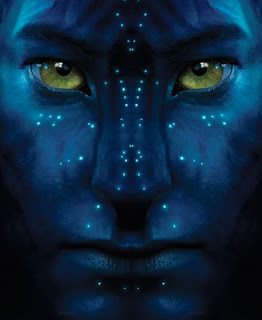 At the time of writing, I've just arrived home from seeing Avatar... at last. Although I've previously seen Toy Story re-rendered into 3D, and also Shrek Forever After, this is the first live action film I've seen in the format. Not only that, it was, of course, filmed in 3D and not merely "upscaled" in post-production as, say, Alice and Wonderland was.
The film had been a labour of love for James Cameron for years and that can be seen in the fantastic world he has created. Pandora is beautiful planet with its own unique flora and fauna much of which is either fluorescent or luminescent. The ecosystem is finally balanced and there is an interdependence between the Na'vi (the humanoid inhabitants) and the other creatures and plant-life. Indeed, the Na'vi can "plug in" to horse and dragon-like creatures to ride them using the power of thought, and also to the "Tree of Souls" to connect with their ancestors.
Unfortunately, the planet also houses huge reserves of "Unobtainium" which has led to the establishment of an human mining operation which threatens the existence of the Na'vi. To make communication easier, Avatars have been made using Human and Na'vi DNA. These allow the humans to take the form of the Na'vi and get close to them.
With it's heavy focus on the unique environment of Pandora, as well as references to an earth which has been sucked dry of its own resources, this is a none-too-subtle lesson about the dangers of  messing with nature. It is also a film about identity and, to some extent, about race relations.
The story itself is relatively flimsy and predictable and the film is too long but these are forgivable sins in this instance. Cameron's achievement with this film is to show what is possible with 3D. In doing so, however, he has been careful not to create some form of demonstration or exhibition piece. He doesn't, for example, use the 3D to bring the action into the auditorium on too many occasions, rather he uses it to provide depth to the picture and to support and enhance the landscape and special effects (expertly provided by WETA, Peter Jackson's studio which created the effects in Lord of the Rings).
Of course, most film reviews would feature comment on the story, the script, the acting and in these regards Avatar is not without its limitations. On its own terms, however, Avatar is a success, leading the way into the brave new world of live action 3D cinema.
Andrew
Posted by oneexwidow at 02:44

Pandora is beautiful planet with it's own unique flora and fauna ...
And unnecessary apostrophes as well...

That's what yopu get for posting and proof-reading at 2 in the morning!