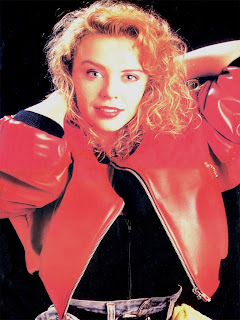 Once upon a time, there was a boy who loved Kylie. He had a poster of her on his wall and remembers his joy at receiving his first album, the self-titled "Kylie".
Then the nineties happened and the boy in question became quite sniffy about pop music... Not because he was into anything too leftfield or outre - quite the contrary - but he considered himself too grown up.
This period coincided with a difficult decade for la Minogue as she sought credibility but lost her commercial appeal.
Fast-forward to the early 21st century and the boy had chosen to embrace his latent love of pop and Kylie, with the aid of a pair of Gold Lamé hotpants, has exploded back onto the pop scene.
Like Madonna, Kylie has managed to reinvent herself for successive albums. She's had her ups and downs and managed to emerge stronger. Unlike Madonna, she doesn't have as an aggressive as business edge and a much more human touch.

It's hard to believe that it's 25 years since Locomotion and I Should Be So Lucky. To mark the occasion, Ms Minogue has planned a year of treats for fans. It may all be a bit self-indulgent but who can grudge Kylie her chance to celebrate 25 years in the pop?
The first of the treats is a new version of 1992's Finer Feelings, recorded at Abbey Road. This is rather special:

There's more on the revamped website, including a great timeline.

Andrew
Posted by oneexwidow at 07:00

So beautiful, in both sound and vision.
Yes, our Kylie did go through a period when she was considered 'naff' (though I've always stood by her - so there!) but she did indeed return, as you say, stronger than ever.

Whereas Madonna attracts the full gamut of possible opinions, I've yet to meet anyone who says he/she does NOT like Kylie. Though if I ever do, that person is OFF MY LIST!