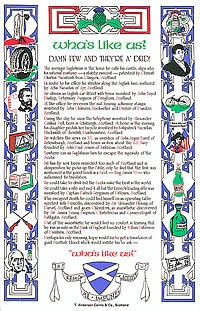 As a Scot living in England I normally avoid parochialism but as today is St. Andrew's Day I'm going to make an exception. Today's blog entry is from a postcard written and published by T. Anderson Cairns in 1979.
Wha's Like Us? by T. Anderson Cairns
The average Englishman in the home he call his castle slips into his national costume, a shabby raincoat, patented by Chemist Charles Macintosh from Glasgow, Scotland.
En-route to his office he strides along the English lane, surfaced by John Macadam of Ayr, Scotland.
He drives an English car fitted with tyres invented by John Boyd Dunlop, Veterinary Surgeon of Dreghorn, Scotland.
At the office he receives the mail bearing adhesive stamps invented by John Chalmers, Bookseller and Printer of Dundee, Scotland.
During the day he uses the telephone invented by Alexander Graham Bell, born in Edinburgh, Scotland. At home in the evening his daughter pedals her bicycle invented by Kirkpatrick Macmillan, Blacksmith of Thornhill, Dumfriesshire, Scotland.
He watches the news on television, an invention of John Logie Baird of Helensburgh, Scotland, and hears an item about the U.S. Navy founded by John Paul Jones of Kirkbean, Scotland.
Nowhere can an Englishman turn to escape the ingenuity of the Scots.
He has by now been reminded too much of Scotland and in desperation he picks up the Bible, only to find that the first man mentioned in the good book is a Scot, King James VI, who authorized its translation.
He could take to drink but the Scots make the best in the world.
He could take a rifle and end it all, but the breech-loading rifle was invented by Captain Patrick Ferguson of Pitfours, Scotland.
If he escaped death, he could find himself on an operating table injected with penicillin, discovered by Sir Alexander Fleming of Darvel, Scotland, and given chloroform, an anesthetic discovered by Sir James Young Simpson, Obstetrician and Gynecologist of Bathgate, Scotland.
Out of the anesthetic he would find no comfort in learning that he was as safe as the Bank of England founded by William Paterson of Dumfries, Scotland.
Perhaps his only remaining hope would be to get a transfusion of guid Scottish blood which would entitle him to ask:
"Wha's Like Us?"
Have a great St. Andrew's Day!
Andrew
Posted by oneexwidow at 07:00