A message to Little, Brown

Yesterday, my copy of Iain Banks' latest book, Stonemouth, arrived. Banks is one of my favourite authors but it's fair to say that his recent works haven't reached the heights of earlier favourites such as The Wasp Factory, The Bridge and The Crow Road. His last novel, Transition, did mark something of a return to form - possibly as it bordered on the SciFi he writes as Iain M Banks.

I'll be reviewing Stonemouth in due course, and have already made some notes on the first chapter, but this post is more of a mini-rant about the cover art of the book.

Once upon a time, Banks' novels had striking abstract black and white covers, often embossed. For the publication of Dead Air in 2002, the look was changed and previous books were re-issued to match with colour-washed stock photographs adorning them. After a hiatus of 5 years, 2007's The Steep Approach to Garbadale kept some elements of this new design but featured an illustration rather than a photograph.Transition in 2009 featured a maze-like design in black and lime green (which was reproduced in red and black  for the paperback.)

Stonemouth's cover seems to complete this gradual descent from the excellent early covers to something which is, to me at least, pretty uninspiring. Indeed, it's not just me. When the cover was unveiled, there was a view on the Iain Banks forum boards that this could be some sort of temporary image while the actual artwork was finalised. Sadly, though, this was not the case... 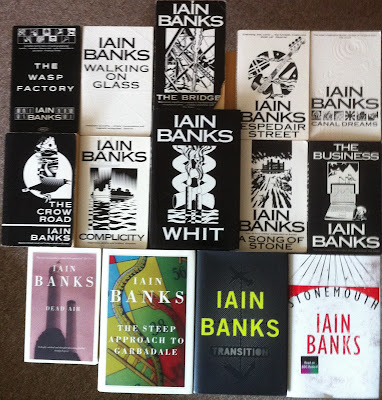 They say you shouldn't judge a book by it's cover but when you're stood in a bookshop, that is exactly what you do. Without a knowledge of Banks' work, or any other info, I doubt I'd pick Stonemouth up.

Ultimately this post is an appeal to Little, Brown and Abacus in the UK and Hachette in the US: Sort it out - it's not too late to improve things for the paperback edition.

Andrew
Posted by oneexwidow at 15:46

That was an inspiration to me. Thanks for sharing the such an effective information.
abacus book suppliers
abacus franchise
abacus for kids
abacus maths.