Dreams of a LIBERAL Democratic conference

I've never been to a party conference before. The closest I've come is watching proceedings on TV and local party's AGM. The first lacks the atmosphere, the camaraderie, the hustle and bustle, the immediacy and the nights at the bar and the second, well it's a different sort of event altogether!

This year, though, that's all set to change. In September, I'll be packing my bags and heading off to Brighton. I'm really looking forward to it - to meeting new people, many of whom I interact with online. To the big speeches from Nick Clegg, Tim Farron, our various ministers and grandees. To the debates on everything from party bureaucracy to major policy positions. To fringe events where one can feed the mind (and the body). To the conference exhibition and even perhaps Glee Club. OK, maybe not Glee Club but you get the gist... Maybe that night I can explore Brighton as I've never been before - and free time is likely to be extremely limited.

Most of all, I'm looking forward to being part of a conference which will stand up for Liberal values in the U. K. A conference which last year, for example, passed a motion in favour of both Equal Marriage and Equal Civil Partnerships. A conference which democratically makes party policy and isn't afraid to disagree with the leadership, even whilst in coalition government. A conference where any party member can attend, and where any attendee can be a voting rep if selected by their local party. All you need is one of these: 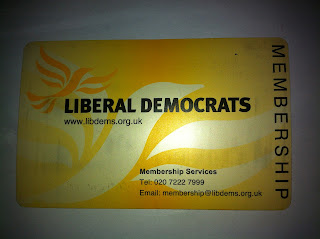 But this is where the dream becomes less real... This year, as last, the Police wish to carry out pre-conference accreditation of attendees. This is said to be essential for security at a time when the party is part of the government. This is said to be necessary over and above physical security checks and scans at the conference venue.

It is also said to be necessary given the chance of an attack like the Brighton bomb of 1984 or the attacks in Norway last year. Quite how a process of accreditation would have stopped either of these acts is not explained - mainly because it wouldn't have. The Brighton bomb attacked a hotel rather than a conference venue and Anders Breivik gained access to Utøya by impersonating a member of the Police.

The article on Lib Dem Voice seeking views on the implementation of accreditation this year also contains this bizarre line:

"Anyone can join the party for as little as £12 and can then attend conference as a party member."

I'm not quite sure what this is driving at - are we selling ourselves too cheaply? Perhaps we should be offering Premier League memberships of £250,000 or more... The fact that the party has membership rates from £6 (for those on benefits, students and the under-26) is something to be proud of. This is a party which believes in providing access to all. It is not a reason to insist on draconian "security" measures.

Only a handful of weeks ago, the Lib Dem blogosphere was united in standing up against plans to extend the amount of information routinely collected and stored by Internet Service Providers so that it could be accessed by the Police and Security Services. One defence of this proposal I heard was that it "should be done, because it can be done".

It is this mindset which seems to be present in the desire of the Police to put in place accreditation. Evidence of the security benefits of accreditation is slight. Evidence that it can be invasive and discriminatory is rather thicker on the ground.

In a free and fair society, security concerns have to be balanced with individual freedoms. Freedom of assembly is fundamental - as is freedom of expression. We should not be subcontracting decisions about who should attend our party conferences to the state.

The Liberal Democrat constitution begins and ends with these words:

The Liberal Democrats exist to build and safeguard a fair, free and open society, in which we seek to balance the fundamental values of liberty, equality and community, and in which no one shall be enslaved by poverty, ignorance or conformity. We champion the freedom, dignity and well-being of individuals, we acknowledge and respect their right to freedom of conscience and their right to develop their talents to the full.


These are the conditions of liberty and social justice which it is the responsibility of each citizen and the duty of the state to protect and enlarge. The Liberal Democrats consist of women and men working together for the achievement of these aims.

The Federal Conference Committee would do well to remember this, as well as last years motion - which was critical of the process - when they next meet with Sussex Police.

I'm not alone in blogging about this and suspect this is far from over. There are many in the Lib Dem blog and twitter-spheres that are on my list of people I'm looking forward to meeting at conference, including Caron Lindsay, Stephen Glenn and Sarah Brown. I sincerely hope that accreditation doesn't go ahead and that I get to meet all three of them.

Andrew
Posted by oneexwidow at 22:47

We shall be doing our best to drag you along to Glee Club now, you know that don't you?

Hi there. I found your website by the use of Google while looking for a similar topic, your website came up. It looks great. I’ve bookmarked it in my google bookmarks to come back later.