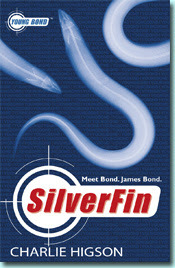 It's James Bond's first term (or rather, his first half) at Eton and things take a bit of getting used to. Odd rules and customs seem incompressible and some of the older pupils can be, well, bullies. Soon, however, it's the Easter holidays and a chance to rest at the home of his Uncle in the highlands of Scotland, near Loch Silverfin. Little does he know that things are about to take a dark twist and he will find himself drawn into an adventure he never expected...
This is the first of Charlie Higson's Young Bond novels, which are fully authorised by Ian Fleming Publications. In it he begins to construct a back story for Bond' and his early life as a child in post World War I Britain.
Higson has cleverly taken the essence of Bond's character  - grit, courage and determination - and transposed it to into a younger, more naive vessel. He has also taken the best loved elements of the films - the manic villain, the chases, the Bond girl - and worked them into the plot, thus enhancing the authenticity of this as a part of the Bond canon.
Despite being set between the wars, he has given the characters - and their dialogue - a current feel in keeping with his young audience. Although slightly odd, from the perspective of an older reader, this approach does work and the target audience (11-13 year old boys, I'd say) will take it for granted.
There are a couple of places where, for me, he does misses the mark, though. For instance, I thought naming the girl Wilder Lawless was fun but naming her horse Martini was a bit much. Such squabbles were minor though and did not detract from my enjoyment of the book. Indeed, I liked it so much I have already added the next, Blood Fever, to my Amazon wish list.
I'd thoroughly recommend Silverfin to any fan of James Bond, young or old.
Andrew
Posted by oneexwidow at 06:00

Useful recommendation, which I really must follow up - eventually.
Only just got round this year to reading Sebastian Faulks' 'Devil May Care' with which I was quite impressed, even though, despite Faulks being one of my favourite contemporary authors, he lacks the words-tumbling-out-breathlessly style of Fleming which was what really made the originals so readable, putting aside (if one can be allowed to) the occasional misogyny and homophobia, the latter especially surprising seeing as Fleming was so friendly with Noel Coward; in fact their Jamaican residences were adjacent. But the Bond books are still gripping tales of a digestible length, which one can read right through in one sitting of two hours or so. Every few years I read Fleming's entire Bond canon in chronological order, the latest turn being the 6th time at least.
So anyway, I'll certainly put 'Silverfin' on my 'books to catch' list. Thanks.
('Wilder Lawless' indeed! - though not nearly as provocative as 'Pussy Galore' or, in the film only, 'Plenty O'Toole'!)