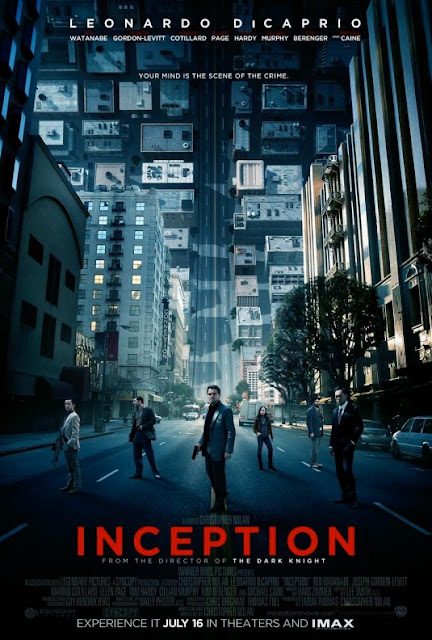 I went to see Christopher Nolan's Inception this afternoon. Starring Leonardo DiCaprio, this is set in a world where the US military has developed a technology for sharing dreams. Initially this meant that service personnel could engage in close combat without concern of death as while pain in dreams is real - death would only cause the subject to wake up. This  technology has been adapted outside the military and is being used for, amongst other things, industrial sabotage.
DiCaprio plays a former "architect" - the term given to those who create the dream worlds to be utilised - who is haunted by personal tragedy and is unable to return to the States to be with his children. Engaged as an "extractor" to steal commercial secrets, he is then offered a contract for which payment would be entry to the US. All he has to do is plant a thought into the subject's subconscious - the "inception" of the title. The only problem is that this is something which is believed to be impossible or at least extremely difficult.
He accepts the assignment and puts together a team, and a plan, to achieve the objective. Will things go to plan? Will he escape the dreams that haunt him? In this world of reality and dreams, what is truly real?
Nolan succeeds in creating a world where this technology is taken for granted and doesn't labour this in the set-up of the plot. He also interweaves the backstory of DiCaprio such that the film is not merely an all-action blockbuster. This is an action thriller with an intriguing concept at it's heart - as such is in the mould of The Matrix.
DiCaprio is very good as the troubled architect-turned-extractor and the cast includes Ellen Page as a brilliant young architect and Tom Hardy as a forger with the ability to change his appearance in the subconscious world. Indeed, the whole cast - complete with cameos from Michael Caine - turn in enjoyable performances.
I really enjoyed the film, and although the start is frenetic and confusing, by the mid-way point things are relatively clear. While some elements may be predictable, the film still has a suitably ambiguous ending. My only real criticism is that the Hans Zimmer soundtrack was a but a bit overwhelming in places. If you've not already seen it, Inception would definitely be a film I recommend heartily.
Andrew
Posted by oneexwidow at 19:10

I enjoyed the film a lot, partly because the big budget special effects seemed to enhance the plot (e.g. making it clear that the people in the hotel were also in the vehicle falling through mid-air) rather than used as a substitute for having a plot. A welcome change!

Yes, we're at one on this Andrew. You mention the Hans Zimmer score. It was only on second viewing that I noticed that almost throughout the entire film there's a chug-chug pulse in the background, sometimes even up-front, which helps to keep the audience on edge even if not aware of it. Zimmer has certainly overdone it on previous films. I think this time he may have come close here too but I myself didn't find it quite as obtrusive as you did.