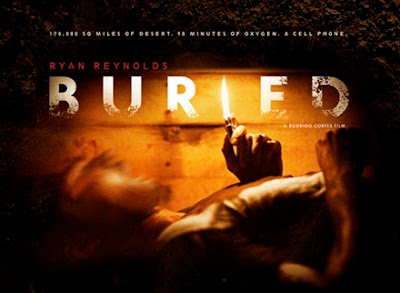 Last night, I went to see Buried. I had seen a trailer for it on my previous cinema trip to see Inception (reviewed here) but all I knew about it was that it features a man trapped in a coffin with just a mobile phone and cigarette lighter... and 90 minutes to live.
While it is not a film about which you want to know too much prior to seeing, I feel I can furnish you with a little more information: Ryan Reynolds plays Paul Conroy, a contractor for an American conglomerate involved in the reconstruction of Iraq. His convoy has been ambushed and when he wakes up he discovers he's in a box which he rapidly establishes is, indeed, buried.
What follows is, essentially, a one-man performance. Aside from a video text that he receives at one point, all the other actors exist merely as voices on the phone which he finds in the coffin. Having lost his "safe number" he tries desperately to make contact with the outside world and seek help.
Although the film "action" is almost entirely in the coffin, the director does make use of a number of camera shots and angles so as to prevent the film from becoming visually boring. It also makes good use of a blacked out screen when the lighter is extinguished.
At the end of the day, I'm not sure if Buried is anything more than a thriller about a man trapped in a box. For all the that it raises questions about the role of the west in rebuilding Iraq, how we deal with hostage situations and about how big commercial entities act, these seem only to create a narrative rather than to provide comment and provoke thought.
So does it succeed as a thriller? Sadly, I think not... For me, the tension was not kept a sufficiently high level throughout. While the ending wasn't unsatisfactory in itself, the build up to and execution of this could have been handled better.
I will include a final word, however, in praise of the old-style opening credits which were both a surprise and a joy. I wouldn't recommend going to see a film just for the credits, and I'm not sure I'd recommend the rest of Buried.
That, of course, is just my view - you may have seen it and disagree or you may wish to form your own views.
Andrew

I saw it a few days ago while visiting my sister on Teesside. Wasn't really expecting much from it and only went for the sake of filling in time by seeing something - anything. But was quite favourably impressed. I thought it was a risky film to make, in the sense of having for the entire time just one actor in a very confined space - not exactly what modern audiences, demanding spectacle, will flock to see. But I know it's doing well at the box office and so am pleased with that.
I found the film effective and suspenseful and (I hadn't realised this before the opening credits) as it's not American, it doesn't have the conclusion that screen-trial audiences might have demanded, in the manner of the God-awful ending of the American version of the far superior Dutch 1988 thriller, 'The Vanishing'.
But for 'Buried' - my verdict would be 8/10. A 'go see!'

Having read a number of reviews since I wrote mine, it appears yours is the majority view.

It's one thing not to know much about the plot beforehand, but methinks the title gives this one away!

Meantime I've been watching an altogether other type of film...

Made in Scotland: The Doctor Watches With Great Delight...

Not one for watching over dinner!