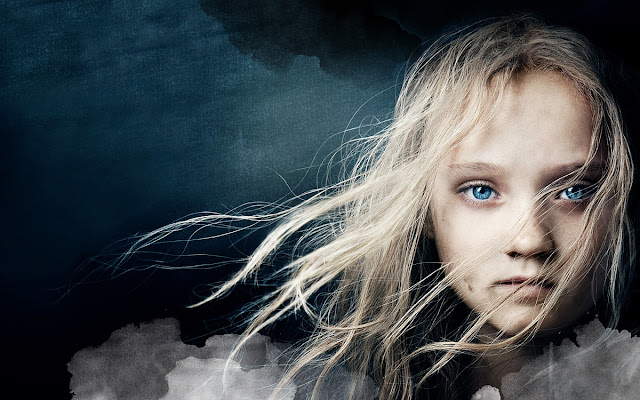 Les Misérables is one of my favourite musicals. Although it is over a decade since the last of my four trips to see it, I still know huge chunks of by heart. I have, therefore, been looking forward to seeing the film version. I didn't necessarily intend to go on the day of release but, somewhat spontaneously, I decided to go last night.

The film has stuck almost completely to the stage version: a brave move given its length and the lack of an interval when viewing it on film. Consulting my copy of the Original London Cast recording has confirmed that only a couple of numbers were cut (although a few were abridged) - and that the running order has been varied.

As with the film version of Evita, there is new song, with music penned by the original composers Claude-Michel Schönberg and Alain Boublil and lyrics once again provided by Herbert Kretzmer. I must confess to having been concerned about this but I was pleasantly surprised. It may have been a wee bit twee but it bridged a gap in the stage version and moved the story on.

So much for the good stuff, but what did I think of the film itself? Well, I was worried you might ask that... I'm afraid I couldn't get really get past Crowe's singing, and to a lesser extent, Jackman's. My immediate post show Facebook tweet sums up my thoughts in this regard: "When casting a Musical it would help if the lead actors could sing..."

Jackman's voice improved through the film but Crowe's didn't. The films unique selling point is that the singing was recorded with the action, rather than pre-recorded and then dubbed on. As I type this, I'm listening to the soundtrack (which was recorded after the film) and I don't think that capturing the singing as part of the performance is to blame - I really do think they were poor singers and this had a real impact on my enjoyment of the whole film.

Hathaway, on the other hand, was a revelation as Fantine and, in terms of the actors, head and shoulders above the rest. Her rendition of the "I Dreamed A Dream" was fantastic. Sasha Baron-Cohen was good as Thénardier, complete with comedic French accent. Helena Bonham-Carter was also good, as Madam Thénardier. Amanda Seyfried and Samantha Barks performed well in the roles of Cosette and Eponine, Barks was particularly good although the former was slightly patchy in places. Eddie Redmayne made a passable Marius.

It would be remiss of me not to mention the various numbers sung by the chorus - which were performed with the right level of joy and levity to lift the mood and the tempo. And, despite my earlier comments on Crowe and Jackman, the vocal (and physical) duelling track "Confrontation" between them was excellent.

Visually, the film captures the grit and grime of revolutionary France and the various sets are good (although the barricade not necessarily as impressive as the stage version). Those who have seen the stage show, though, may feel that some of the magic of theatrical sets and effects has been lost in the transition to the screen - although director Tom Hooper does make an effort to retain the impact of some of the deaths.

Hooper is keen to mine the emotion and expressions of the actors in the way that a singer projecting to the back of a Victorian theatre can't. In doing this, though, I found some of the camera angles and shots strange. There were also too many close ups of people almost (but not quite) singing to camera. It was also oddly notable that the female leads were considerably smaller than their male counterparts - and this was often accentuated by the choice of shots.

So, I came away singing (somewhat predictably, Do You Hear The People Sing) but disappointed. Ultimately the stars of the show - other than Hathaway - are the songs and the score. And they're available (in many versions) elsewhere. I would recommend going to see Les Misérables: but go and see it on stage!

I should note that my review seems to be at odds with the Oscar nominations garnered and the generally favourable reviews elsewhere. There was also a small round of applause from some of the audience in the screening I went to, so maybe it's just me...
Posted by oneexwidow at 04:20

Your reaction seems as though it could well be in congruence with my own when I see it on Tues morn (snow/ice permitting - and when I can get in for just £3). At least that's what I'm expecting. I'm bracing myself for it not living up to the theatrical experience which, by definition, film versions can never do, lacking the thrilling complicity between actors and audience, which gives it a kind of 'electric charge', something cinematic viewings can never do.
Having said that I'm still hoping for good entertainment and a lot of what you say reassures me. I doubt if hottie Jackman could have been bettered, while reams have already been written about Crowe's delivery, so that's not going to be a surprise. But I'm pleased you liked the portrayal of the Thenardiers when a number of others were not impressed by these two.
I was also apprehensive about discovering which numbers are being cut - from what you say it's not disastrous - but on the other hand I'm looking forward to hearing the new song.
Your talk of some of the singers being 'poor' is a bit worrying. I'll be bearing that in mind while wondering if they really HAD to sing live for a film version. I suppose it was an attempt to get closer to the theatre version, but as they'd already ditched so much else of that medium they didn't really have to do the vocals that way too.

For me, film versions of stage musicals hardly ever come even close to the theatrical experience, and never supercede them as an experience, and there's no way this one will not follow that. I'd love to see 'Les Mis' on the stage for a fourth time. It never fails to affect me more deeply than any other musical I know. But even my venturing to see it in an inferior cinematic version in a few days time means that I'd still better take several hankies with me.

So thanks for that review, Andrew. Despite your reservations it does sound like in several respects it ought to be worthwhile.

Andrew
An interesting review
Thank you for pointing it out.... The "realism" of the singing, I know will disappointment me.......I love the quality of the stage performances