Question: Why did I feel the need to advertise that this post was Not Safe For Work when every day, up and down the country, millions of men and woman read The Sun at their places of employment and every one of them will see a comparable image? 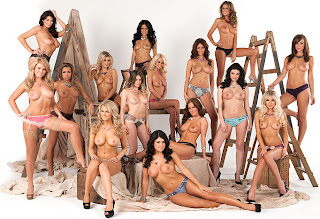 Every single one of those readers will see page three. Every weekday, a different topless woman will be smiling out at the reader. Every one of them will be reduced to a first name, an age and a location. Kayleigh, 23, Rotherham. Jo, 19, Maidenhead. Helen, 21, Weston-super-Mare.

Page 3 is a misogynistic hangover from an era that has past. It objectifies and marginalises woman in casual, offhand fashion. Through the "News In Briefs" feature (which is genius) it seeks to suggest that this is all tongue in cheek, a bit of fun, harmless. In reality it is inappropriate in the context of a mass-market, family newspaper.

I've no idea whether the image above - taken from The Sun's website on a page last updated in May this year - appeared in the print copy of the paper or not. For the purposes of this post, it matters little. The headline above the picture was "Honeys 4 nothing, Page 3 for free." It's so achingly clever, you almost overlook the underlying implications and assumptions.

It used to be considered acceptable for workmen to wolf-whistle and shout at woman who passed building sites. Then it became frowned upon before it became totally unacceptable. Page 3 is stuck in the era of builders leaning over scaffolding and suggesting that "you don't get many of those to the pound"...

I believe that even The Sun tacitly accepts that Page 3 isn't that appropriate, or appreciated, beyond it's traditional market. If you read the paper on a Saturday, the page 3 girl normally acquires some lingerie (and often is a "celebrity"). Does this suggest that there could be scope to grow or develop their weekday market without page three? Who knows? Perhaps any change will come down to a commercial decision, rather than as the result of a moral or philosophical judgement.

Don't get me wrong, I'm not a prude. I'm not generally in favour of banning things and I wouldn't support a ban on page 3. I do think, though, that The Sun should consider dropping it voluntarily, just as The Mirror did around 20 years ago. If men or woman want to look at naked women, there are plenty of other places where they can find such pictures - places where the news won't get in the way.

For more on this, see the ever-excellent Caron's post on the subject - and consider signing the petition to take the bare boobs out of The Sun. In the words of their current advertising campaign: Get Involved.

Andrew
Posted by oneexwidow at 03:06