The Secret to Being Gay and Happy?!

Over on Digital Spy yesterday, the Gay Spy blog promoted the latest issue of Attitude - the 'Issues' issue. This is the cover: 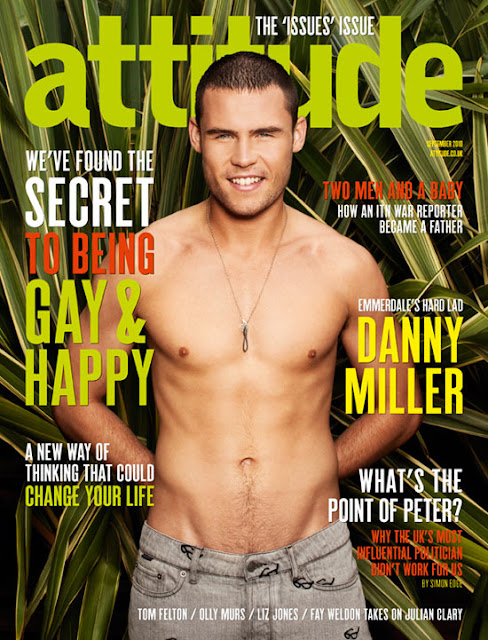 So what jumps out at you about it? Is it the picture of Danny Miller? Or is it the headline to the left: "We've found the secret to being Gay and Happy". Really? I didn't know that the two were such elusive bedfellows. I know lots of people who are gay, sorted and reasonably well grounded. I know people who aren't gay and aren't happy.
Personally, I take offence. Though perhaps I'm being too sensitive. Or perhaps it's easy for me to take offence from a position of being at ease about my sexuality. I'd be interested in other people's take on the subject.
On a second look I realised that the text underneath belongs with the main headline and in full it reads:

"We've found the secret to being Gay and Happy. A new way of thinking that could change your life."

Is this better? Well,  slightly. I've always been intrigued by positive thinking strategies - although I'm not sure there's a need to tailor such strategies to any particular sexuality. Surely one of the first steps in positive thinking is to accept who you are regardless.
There's another reason I was less than impressed with the headline. But I'm going to rewind slightly in order to elaborate.
Gay Spy weren't the only people to take notice the magazine, one of the issues examined in the magazine is the level of mental illness amongst gay people and this instigated on the Today programme on Radio 4. Does being gay predispose someone to mental illness, or are higher than average rates of mental illness amongst gay people the result of societal pressures and expectations? I believe, of course, that this is not a chicken or egg question, and that the latter is the case.
This is a serious issue and it's good that it is receiving some attention. As such, it is disappointing that Attitude have chosen a headline which, in my opinion, undermines the seriousness of the issue, if not actually trivialises it. In addition, while positive thinking has its place, in the context of serious mental illness, it's akin to telling someone to pull themselves together.
While I appreciate that Attitude is in the business of selling magazines, it would have been good if they could have done more with the cover of the Issues issue rather than have it look like a cross between the News of the World magazine and Psychologies magazine.


Andrew
Posted by oneexwidow at 07:00

Mind Of Mine said...

I love digital spy, its like the bible. Accept more interesting and relevant..

I believe strongly that the pressure's and expectations are the reason behind the large statisitics. But I also believe more often than not that it is our own internal struggles with these issues thats inflate these numbers.